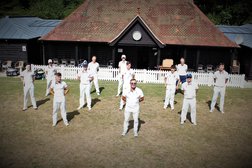 The 2nds extended their unbeaten run to 7 games on Saturday but a worrying pattern is beginning to emerge - a fragile top order bailed out by heroic resistance later on. Our 38 for 6 (chasing 147) was not as bad as 19 for 6 against Hartley, although to be fair Hartley's bowling attack was far superior. George Hess and Adeen Gill had been our saviours against Hartley. George (23 no) again played a key role at Four Elms although the experience of Imran Gill (31) and Keith Hall (48no) enabled Outwood to clinch victory.

Bowling is undoubtedly the teams strength and this was demonstrated again with an impressive opening spell by Imran and Lucas with Harry Crawford looking very sharp behind the stumps. Lucas removed one opener for 0 with a beautiful out-swinger that just clipped top of off while a great one-handed catch by keeper Crawford took care of their no. 3. Meanwhile at the other end, Imran quietly went about his business bowling 6 maidens out of 9 (he was smashed off the other 3, ending on 0 for 9 off 9 overs). There was no let-up when Laurence Williams joined the attack and he was too quick for the no. 4 who generally took guard at square leg. Four Elms were 43 for 2 off their first 20 overs, accelerating to 75 for 5 off 27.3.

At this point Kevin Allman arrived and started hitting the ball sweetly. Interestingly, butcher Allman (no slight intended - he really is the local butcher) is listed as 1st XI captain in the KCVL handbook but seemingly has to play at home as he works until 1:30pm. He put on a stylish 42 before being snaffled by the returning Williams who took 3 quick wickets in his second spell. Four Elms ended on 147 for 9 from their 40 overs.

Laurence was caught behind off the second ball of the innings by a good ball that left him while Harry Crawford was deceived by a lack of pace to be caught and bowled for 4. 5 for 2 off 2 overs! Harry Mawer and Paul Howard staged a brief recovery but like others, went hard at good length balls outside off stump and were punished by good catching. The Four Elms attack must be one of the slowest in the league but slow does not equal bad. It is both accurate and extremely tempting. The key requirement from the Outwood batsmen was patience - something that many have great difficulty in applying. At 38 for 6 in the 10th over, the run rate was not the problem - it was preserving wickets until the end. Luckily Outwood had two old hands (well, relatively speaking) at 7 and 8. They had seen it all before and had good reserves of patience (most of the time). When Imran was caught sweeping for 31, quickly followed by Adeen, 46 were still needed off the last 10 overs with just 2 wickets remaining. The skipper was still there and embodying the definition of patience while regularly picking up singles and the odd boundary. He was joined by George who admirably curbed his urge to launch these 'gentle lobbers' into the next field. Anything short or leg side was, however, powerfully despatched to the boundary and a few overs of 7 or 8 runs quickly got us to the target in the 38th over. Keith held the show together with an extremely patient 48 no but the contributions from Imran and George were crucial.

Another Houdini act successfully completed but with tough games ahead against Southborough and others, the batting will need to stiffen up with someone in the top order holding their hand up and batting long.